The long slider on this example would suggest that this is a badge made for wear on the Foreign service Helmet, the idea being that the long slider of the badge would fit into the folds of the Puggaree on the helmet. This badge appears convincing but two things suggest this is a fake.

Firstly, the long slider appears to be a modern type and is not soldered onto the badge particularly well. Secondly, the round Gaunt ‘tablet’ is of a type know to be a modern fake and has been crudely fixed behind the slider. Had this been a genuine Gaunt badge, it makes sense to suggest that the company would have stamped the slider with the makers name (as it did on other badges fitted with sliders) rather than go to the trouble of fitting a separate plaque.

It is believed by some in the badge collecting community that in recent years a faker has fitted these types of Gaunt plaques to badges in order to increase their value and desirability. 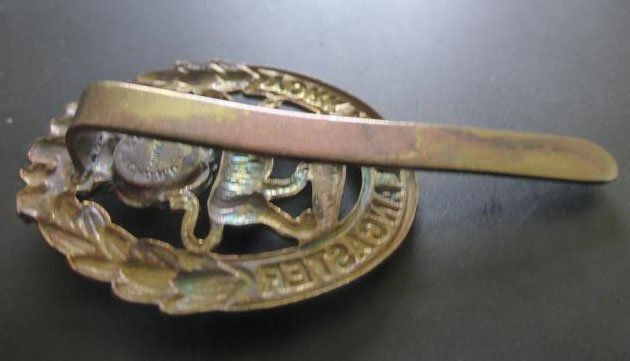